4 People, 4 Conversations, 4 Lives Changed. A man and a woman make love for the last time in the house in which they meant to raise a family. A father and daughter meet in a cafe for the first time in many years- and at first it feels like a date. A woman tells her girlfriend – the love of her life – that she is unexpectedly pregnant. A tormented stranger finds a woman and her baby and the encounter gives him the chance to confront his past. Four ‘Short Cuts’ style stories dealing with love, loss, and finally, grace.

Although his physical appearance remains unchanged, Armando is victim of an increasing fear: to sink, vanishing completely. This morning he woke up weighing 120 kg…

Avatar: 1) Chance event that usually involves a sudden change in the course of something. Change of fortune. 2) Tests someone goes through. 3) Lack of application or alternation of prosperous and adverse events.

Back to the fuchsia / A Fullero Viejo, Flores Nuevas

In their garden of love he’s sowing seeds of doubt, laced with jealousy. But she has ripe manure to feed his trust and, hopefully, help their relationship flower.

As all teenagers, Ainoa has had an exhausting school day. So this summer, for the first time, she has decided to go on holidays wherever she pleases, and not were her father decides. This is how father and daughter get into a long, tense and definitive discussion where the girls holidays in fact uncover certain issues that were not intended.

Synopsis: Conscious Life is a silent film which portrays the pain and delirium of love and tragedy. The short is presented as black and white, set in the late 1920s. The film shows a young photographer in his studio, haunted by the obsession of an unrequited love, and ensuing indifference towards his current lover. Waking from sleep in a dream-like sequence, his photograph on the wall and reality confuse their roles. Commissioned as a music video, the film is intertwined with the homonymous track by Aereogramme.

Three passengers meet each other in a train. Everyone has a secret!

Joseba Perurena, a young terrorist, wants to start a new life together with his girlfriend. However, cutting ties with the past is never an easy thing to do especially when the consequences have not been fully considered. 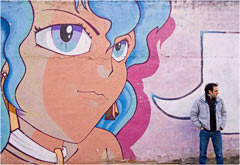 He works at night. She works at day. They have been trying for more than three months and still nothing has happened.